The end of Breaking Bad, I have to say, was actually a pretty disappointing end to a brilliant series, as I felt it didn't add anything that we hadn't already seen.

What had engaged me about the series was the premise of what makes a good man bad and inversely what makes a bad man good. Walter White was a family man and at the start of the series he seems goofy but essentially kind-hearted. Jessie, on the other hand, is a drug addict and a high school drop-out who picks on the vulnerable. As the series progresses we this change with Walter becoming increasingly "evil" and Jessie becoming the one who seems most under the burden of conscience.

At first it is the healthcare system that the show seems to target for criticism - a proud man who is trying to support his family is driven to illegal activity by escalating healthcare costs after being diagnosed with cancer. This, however, does not suffice in explaining Breaking Bad. We see through the fallacy of the good man driven to crime simply by a flawed medical system at certain key moments as the plot develops. One of these moments is when Walter lets Jane overdose when he could have saved her life to protect himself from blackmail. This is when we get an insight into Walter's "family-first", self-protectionist ideology, the guiding logic of which is that the suffering of others is secondary to the interests of him and his family - what falls under these interests develops throughout the show from being simply survival in the face of cancer at the start to inexhaustible wealth and power at the end of the series.We see him develop into a Napoleonic figure unwilling to relinquish any power, but still able to justify his encroachment in terms of a protectionist ideology - in part his victimhood (cancer) empowers this ideology, in that the random bad luck and unfairness that is involved in getting cancer undermines the American Dream and allows him to shift this bad luck onto other "hapless" victims that result from his activity.

The series has echoes of Dogville, in which the impoverished and hard-working residents of a town, who at first seem like honest, hard-working people, are slowly revealed to be cruel oppressors when given any power at all over another person, which they each rationalize in their own way.

I found it hard to work out if Walter White was an everyman and if he was a figure that we were all capable of becoming when left with little to lose or if he was meant to be an essentially amoral psychopath who had just been subjugated to social norms before his diagnosis, eager to mean something before he dies, revealing what exactly is most important in the way he strives to see himself.

The latter seems more likely when we compare Walter and Hank or even Walter and Jessie. Hank sticks to a "moral" path throughout the whole show, playing almost an alternate Walter when his whole career goes up in smoke and he is paralyzed from the waist down. He's, by no means, perfect, but we see in him more innate goodness than in Walter's desperate attempts at moral rationalization.

This is the sense in which the finale was disappointing to me. We get the dramatic, if expected, shift from Walter insisting on his family-centred rationale to admitting that he did it out of enjoyment and that it made him feel alive.

We can then take two interpretations to the show as a whole then. The first is that in American society, we are all a few bad choices away from becoming Heisenberg, but this is contradicted by the development of Heisenberg into the megalomaniac that he eventually becomes, and his complete lack of conscience when compared to  Jessie and Mike, who are more measured in their criminality and still maintain moral boundaries.

The second interpretation is a more conservative one, wherein, Walter is simply a "bad egg" in disguise, who gets punished for his misdeeds just as all the other "bad" characters get punished at the end of the series. This second interpretation seems to undermine what had been so interesting about the show in the first place, which essentially demonstrated the twisted nature of modern society, wherein a good man can only turn to crime to stay alive and keep his family from poverty.

I guess then, Walter White lies somewhere between these two different  conceptions, or maybe he is both at the same time: demonstrating the cruelty that is instinctual to mankind when threatened - he feels wronged by the world and takes this as license to discount the social contract or any conception of fairness or equality, justifying self-interest and individualism under the guise of "It's us or them".


Posted by Conor Stuart at 7:20 AM No comments:

a visit from the goon squad - jennifer egan 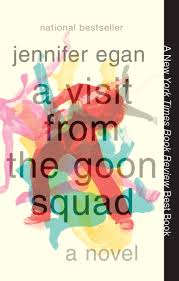 This took a while to get into - the first couple of chapters were a put-off due to the pretentiousness of the first few characters that we are introduced to. After I picked it back up again (6 months later) the novel finally gripped me. Each character in the novel has a central story set in a certain time, some in first person narrative, some just focusing more heavily on the perspectives of certain characters, in their story another character will play a secondary role, and then in later chapters this secondary character will become the focus of their own narrative set in a different time - ranging from the 1970s well into the future - where we discover more about them, and in turn the primary characters of the earlier chapters are featured as secondary characters in these character's first person narrative, giving us more information from another perspective about them. The novel is essentially about time (portrayed as a goon) and how oblivious people are to the little cracks in their relationships with other people and how those cracks will sometimes deepen so that one will no longer recognize the self that was once in that relationship. It was almost shocking when the future life of a character that we've been following alongside is suddenly laid out for us in full, and the dramatic irony is almost heart-breaking in some cases. As the novel proceeds we find out more clues pointing to the reasons behind the bleak denouements of some of the characters' stories - and the stories all seem to echo each other: time brings people to a certain cynicism, comically defined by Lulu as Ethical Ambivalence, that allows them to survive or drives them to death. A severe critique of the media, the music industry, and the role played by technology in our lives runs through the novel - this functions in tandem with the loss of innocence from childhood to adulthood for each of the characters in the novel - as the world seems to have aged into something too cynical to take seriously (actually a lot of the themes related to technology were reminiscent of the Charlie Brooker "Black Mirror" series) The highlights of the book for me were the closet gay football player with a crush on his best friend's boyfriend, Dolly's (LaDoll) job acting as a public relations manager for a middle eastern dictator (and perpetrator of genocide), Jules's sexual attack on a blockbuster film actress, Rolph's relationship with his dad's girlfriend on safari, Ted Hollander trying (not very hard) to find his niece in Naples, as well as the difficulties in Drew's relationship with his son, despite the best of intentions, through the eyes of Alison, his daughter, and Alex and his friends' recommendations being bought on social media in an attempt to create stardom from nothing with 21st Century marketing techniques based reportedly on particle physics.Definitely worth the trawl through the first few chapters (which I had to reread at the end when they became more interesting for the details they provided about later characters).
Posted by Conor Stuart at 7:38 AM No comments: