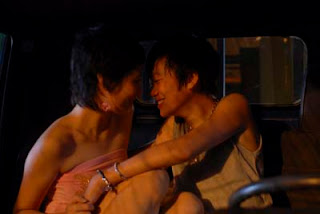 This documentary is included in the series "A Retrospective Collection of Documentary Films from Taiwan 1930 ~ 2003". It sets out to discuss gay life in Taipei, but ends up rather fragmented as it tries to take on many broad ranging topics in one go. It details the failure of a gay bar due to police raids, the sexual relations of lesbians, one man's ambition to have a formal dinner for gays and subsequent emigration to Malaysia, gay marriage and cottaging in 228 Peace Park.


It tries to represent gay culture in much the same way as Bai Xianyong (白先勇) does in his novel Niezi, but it falls into a subcultural representation of the gay scene. It seems to identify with the idea of gay nation building, and the us and them mentality. The male gay subculture represented in the documentary is one of drag queens, and toilet prowlers which seems miles away from the contemporary gay scene in Taiwan, or certainly is not the only face of male gay Taipei .True, the issues it touches upon, i.e. that Taiwan is still quite conservative in its attitude towards sexuality, are still relevant today, and few people come out willingly here, but the documentary lacked a coherent message, and I couldn't relate to it. Maybe as it tackled issues from a different generation. The sense of community that the film tries to foster seems irrelevant in the modern world, and the idea of a formal dinner for "gays" seemed a bit off too. Although at points it tries to break through it, the film seems rooted in the gay/straight binarism and fails to address the more complicated nature of sexuality and gender. This documentary aims to forward a gay view of the gay world, but in this sense it seems outdated, as the term "gay" reduces the whole spectrum of sexuality into opposition with an equally fabricated concept of "straight".
There is an interesting article on this film and "Voices of Orchid Island" (《蘭嶼觀點》) by Kuei Fen Chiu, discussing how the crew of both films employed techniques that made the role of the crew more visible, and self conscious, like the camera employed during the lesbian sex scene and the narration in French, because a foreign language allows her to say things that would be unspeakable in Chinese. The article is called "The New Taiwan Documentary" by Kuei Fen Chiu, if you would like to have a look at it post below and I'll send you the link.